A list of Hardware, that at some point has been part of the Fornax Void studio — or still is.

ROLAND JV-2080
One of my all-time favorites, the JV-2080 comes with 16 part multitimbrality, 64 note polyphony, 4 waveform oscillatros per note and some of my absolute favorite Pad waveforms. With it's huge, bright display and well designed user interface it's very easy to program and also has quite some handy tricks up it's sleeve.

The JV-2080 was used extensively on Cyberspace Database and was a defining force in the creation of the Fornax Void sound and SemiconductorWave genre. Many important tracks like 'Borlando Loom', 'Cyberspace Database' or 'Ramen Multinode' consint of mainly sounds from the 2080. You can find out more about what synths were used on what tracks of Cyberspace Database in the CSDB Production Notes. My upcoming album 'Music for dystopian concrete buildings' was almost exclusively recorded with the Roland JV-2080.
▲

ROLAND JV-1080
Almost the same as the JV-2080 but with a slightly different sound and much smaller, non-graphical display. For detailed information about the differences between the Roland JD/JV/XV synths, check Don Solaris' 'Ultimate Roland JV, JD, XV F.A.Q.'

The JV-1080 was used on Cyberspace Database to record most of 'Yoshimura's Journey' as well as all the sounds of 'The Lost Archives' and the sample used to track 'Nankyoku Data Hive'.
▲

OBERHEIM XPANDER
For a long time called the most flexible non-modular synthesizer ever made, the Oberheim Xpander comes with tons of oscillators, filters, lfos and envelopes and even more routing possibilities. Its a bit like having an analog modular synth in a menu driven box. The Xpander was one of my first synths, and figuring out how to patch it, helped me a lot understanding synth theory. Probably not the most beginner-friendly device, but when you can handle the Xpander, most other non-modular subtractive synthesizers won't be that much of a challenge anymore.

With the exception of some effect sounds, the patches I made and used with the Xpander were - contraty to the device's abilities - often very simple. I really like the raw sound of the oscillators with just a bit of vibrato and a long release time as heard on Cyberspace Database on tracks like 'Oberheim Taxi / Shanghai Xpander', 'Ancient Data Tapes' or 'Server Room Love Letters'.

Between 2014 and 2018 the Xpander was one of my most used synthesizers, but I put it up for sale in early 2019, during the mixing and mastering process of Cyberspace Database to finance the physical release and get rid of the risk of owning such an expensive and rather vintage device.
▲

YAMAHA PSS-480
The PSS-480 is a programmable 2-OP FM synthesizer with MIDI and was the very first synthesizer I owned as a kid. I still have memories of me and my Dad, connecting this thing to my PC with a MIDI to GamePort cable. I also used to do my own patches as a kid, without having too much of an idea what I was doing. This shows that the programming is so easily accessible that you'll start intuitively start changing patch parameters when just playing around on the interface - which I dare to say is very atypical for Yamaha FM synths of the time.

As the original device I own since my childhood generates a humming sound on the audio output since I first owned it back in the early 90s, I bought a second one in June 2016. With the setup shown on the image on the left, I recorded the tracks 'Remembering Johny Castaway' and 'Cyberspace Druids'. I also used the PSS-480 for many crackling drone sounnds on 'Void Gate Access Software', 'Void Gate Panorama Station' and 'Offshore Network Vertex'.
▲

KORG POLY 800 MK2
The 2nd synthesizer I ever owned - found for just CHF 30 (~USD 30) in a thriftstore, half the price of some relatively uninteresting keyboards laying right next to it. While I never really got into programming my own patches on it until years later, this device was important for me as a first step into recording music with hardware synthesizers. I used the Poly 800 quite regularly when recording soundtracks for my projects during my time at film school (2009-2012). My 2016 mini-album Tomes of Erebus was almost exlusively recorded with the Poly 800 MK2, directly onto a Tascam Portastudio 414 mk2 4-track tape recorder without the use of a sequencer.

While the device had some importance in my musical developent history, I never really appreciated it's sound too much and put it up for sale in early 2019 to raise money for the Cyberspace Database physical release.
▲ 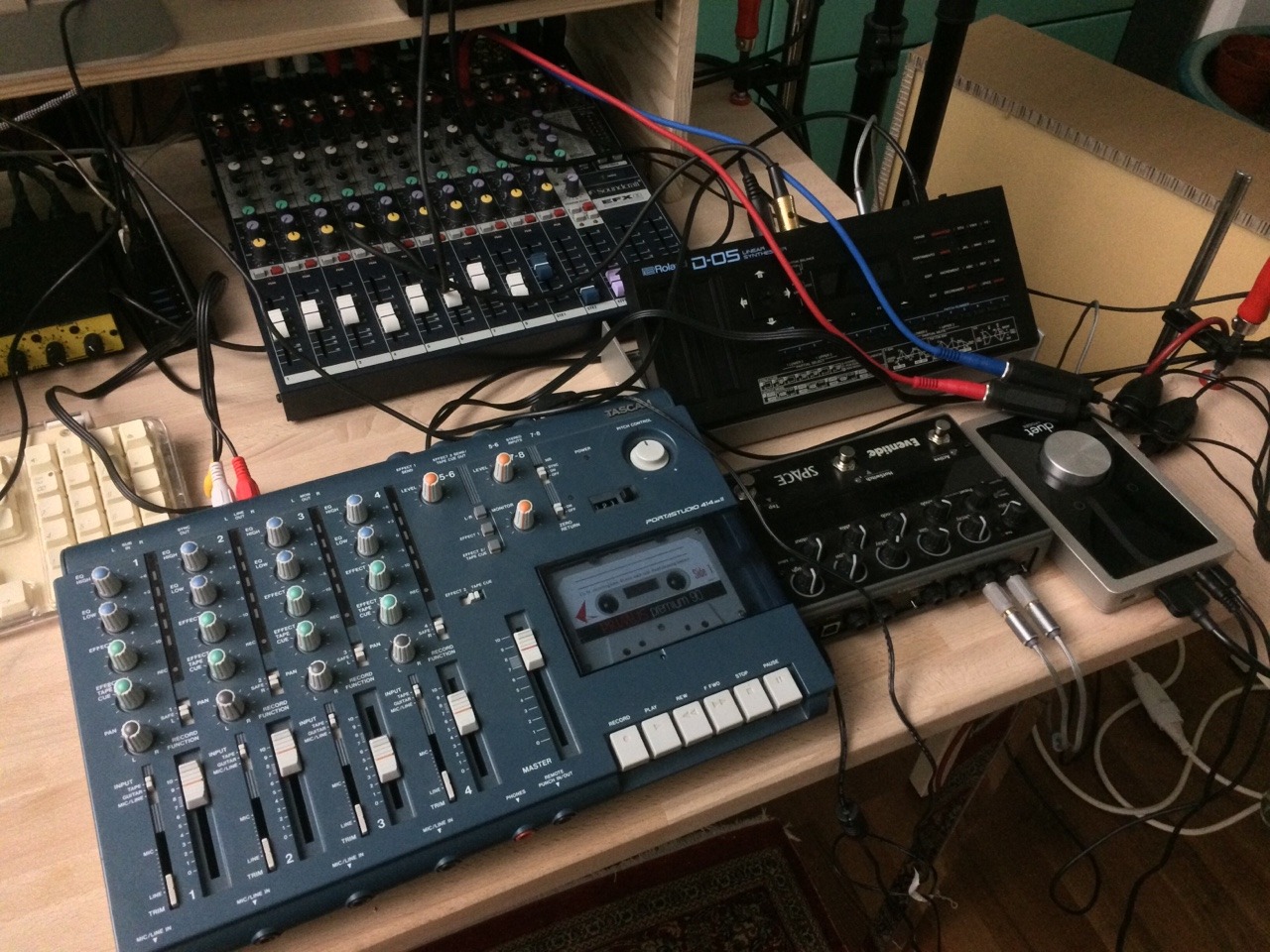 Roland D-05
The D-05 is a reissue of the famous Roland D-50. The architecture reminded me a lot the Yamaha TG-33 which might have been an answer to Roland's success with the D-50.

I used the D-05 on a couple of tracks: 'Super Aliasing' was exclusively recorded with the D-05, my portastudio 4-track and the Eventide Space (the picture on the left shows my setup while recording this track). I also used the D-05 on 'Offshore Network Vertex' and the 'Void Gate' duology.

While I liked it's sound capabilities, I never was particularly fond of it's form factor and it's measly 3,5mm output jacks. I sold the device in early 2019 - arguably a few months too early as it got discontinued soon after and 2nd hand prices of the D-05 skyrocketet far above it's original price.
▲ 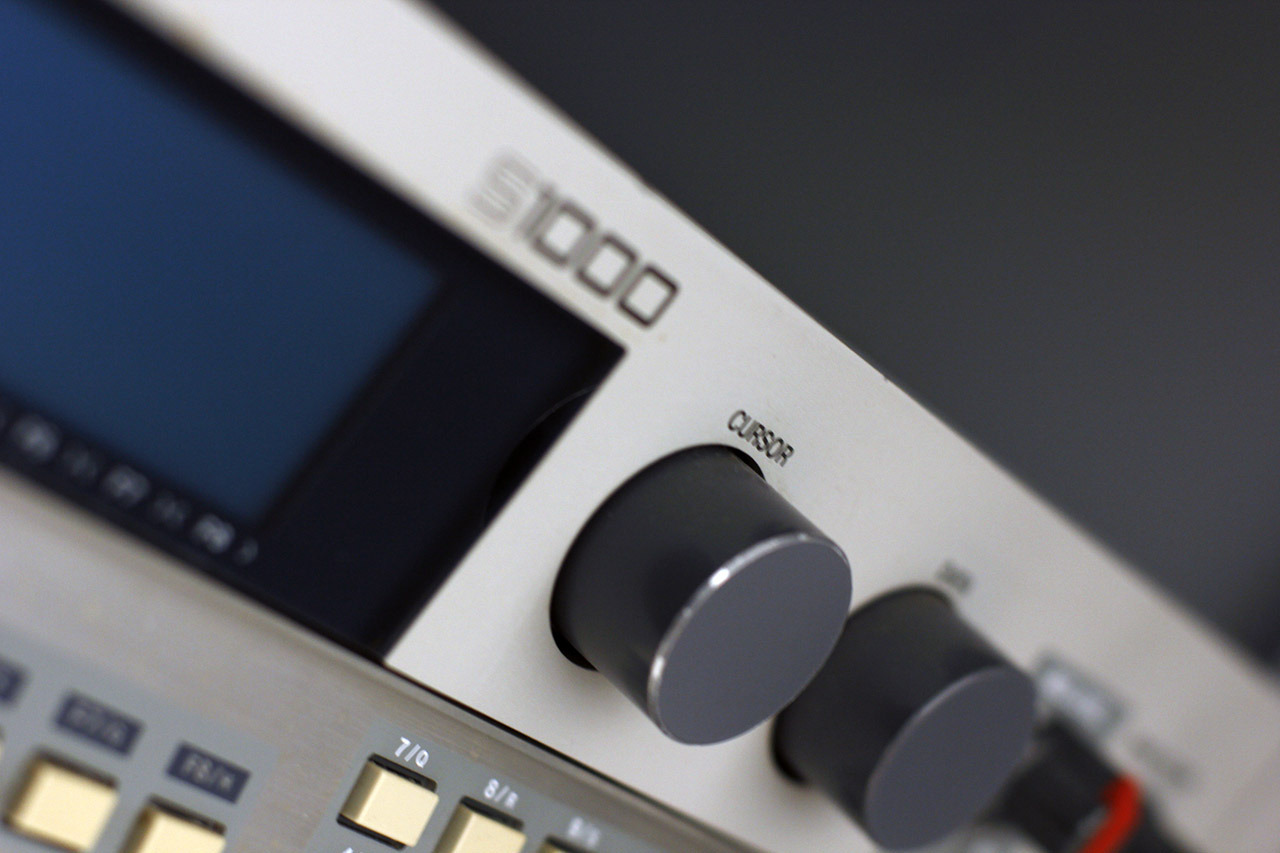 AKAI S1000
While it might not be as grainy as pre-16-bit sampler as the S900 or the Ensoniq Mirage, the S1000 still has a unique coarse sound — maybe due to it's vintage 16-bit A/D D/A coverters. In 22kHz mode it hits a sweetspot somewhere between lofi and CD quality.

The S1000 is featured most prominent on the Cyberspace Database track 'SysAdmin Coffee Break Saga', where it multitimbrally plays many of the instruments. All samples were sourced from other synths in my studio to make use of the sound of the S1000's A/D coversion.

I like to use the S1000 without SD card adapters with floppy disks as storage device. It adds a certain charming slowness to the process. I'm planning to replace the old display on my S1000 though, as it's hardly readable anymore.
▲ 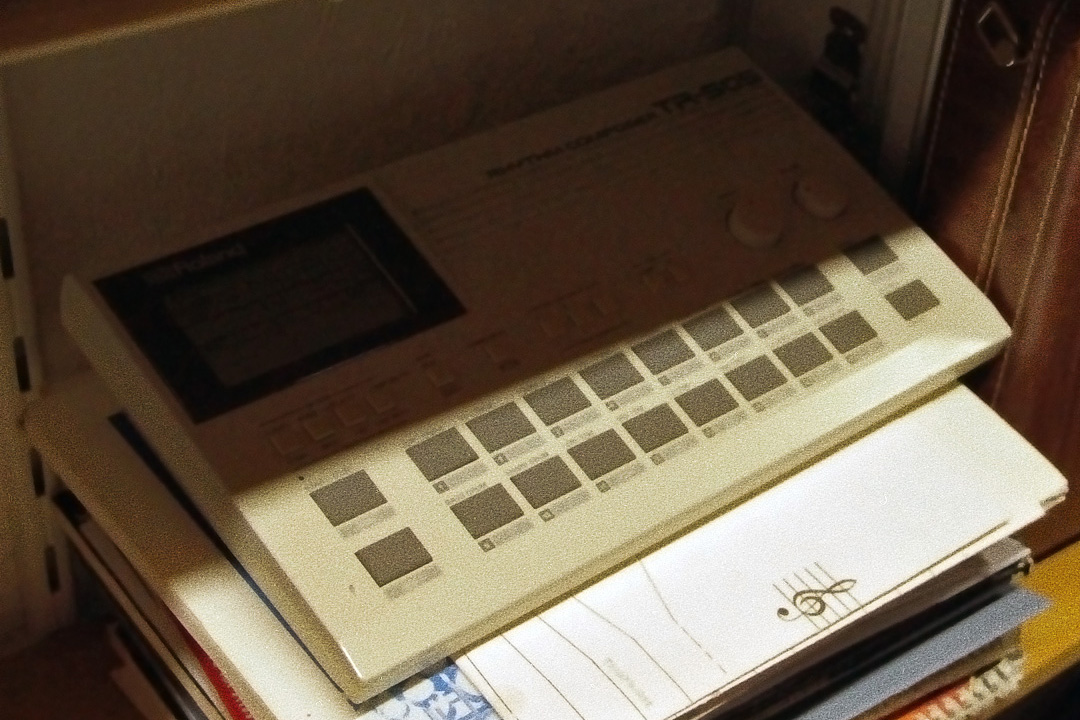 ROLAND TR-505
This 1986 drum machine features 16 drum and percussion samples in 8-bit 25 kHz quality. I borrowed this thing from my brother-in-law, in the late 90s, and it's still laying around in my studio.

I haven't used this device much on Cyberspace Database, but there are some sounds of it on 'Hexadecimal Love Letters'. Its also featured on 'Offshore Network Vertex' as noise effect with a ton of reverb from the eventide space.

Its not something particularly special these days, but it still has a special place in my mind, as it was one of the first electronic music devices and the first hardware sequencer I ever got my hands on.
▲ 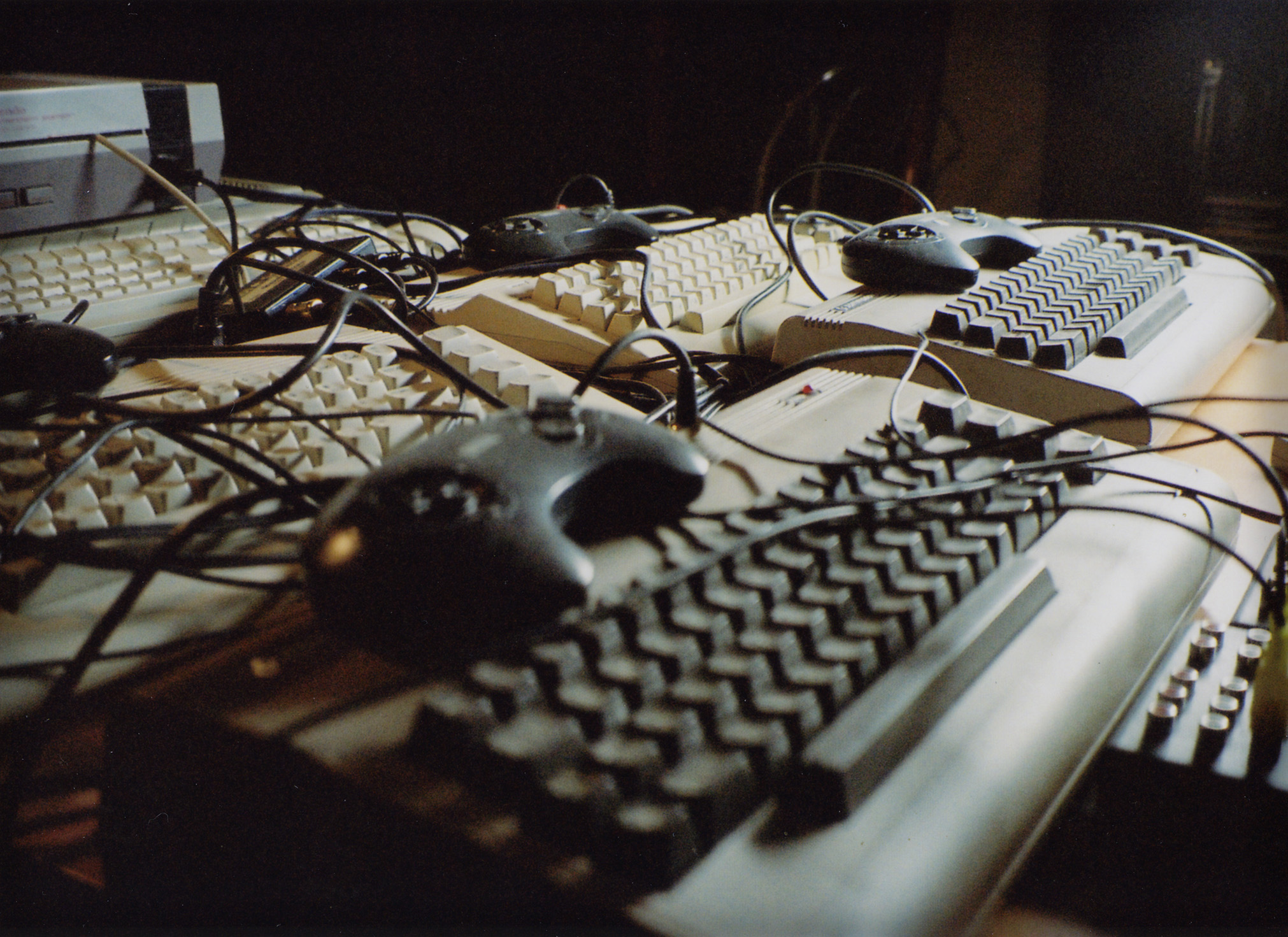 C64 + MSSIAH
Back in 2012, I got myself 4 C64 computers. Two old ones with 6581 SID chips and two C64C models with 8580 SID chips, plus 4 MSSIAH cartridges. Those MSSIAH cartridges are absolutely genius. You got MIDI input, and a bunch of software to programm voices, use the SID in 3x multitimbral or 3x polyphonic mode (or everything in between) as well as the option to use it as a primitive sampler.

I used the SID (both versions) a couple of times on Cyberspace Database. It's especially prominent on Offshore Netvork Vertex, Hexadecimal Love Letters and Void Gate Access Software. The SID can sound really intense and big.

You can hear a couple of track recorded with the setup seen on the pciture on the right on my SoundCloud (4*C64 with MSSIAH + 1*NES with WayFar MidiNES).
▲

CASIO CZ-5000
Capable of some great sounds, the CZ-5000 can be heard on Cyberspace Database as the lead sound on 'SysAdmin Coffee Break Saga'. The 8-step envelopes can create some very slowly evolving sounds. The sound character bears some similarity to Yamaha's DX line of synths. While I like it's sound character and the integrated chorus, I never got particularly warm with the creaking plastic buttons on this synth. Because of this and the fact that I didn't use much more than one self-made patch as well as the huge behemoth form-factor, the CZ-5000 ended up being one of the synths that I sold to finance the physical release of Cyberspace Database. If I ever feel the urge to go back to the CZ sound, I will try to find the much smaller CZ-101.
▲ 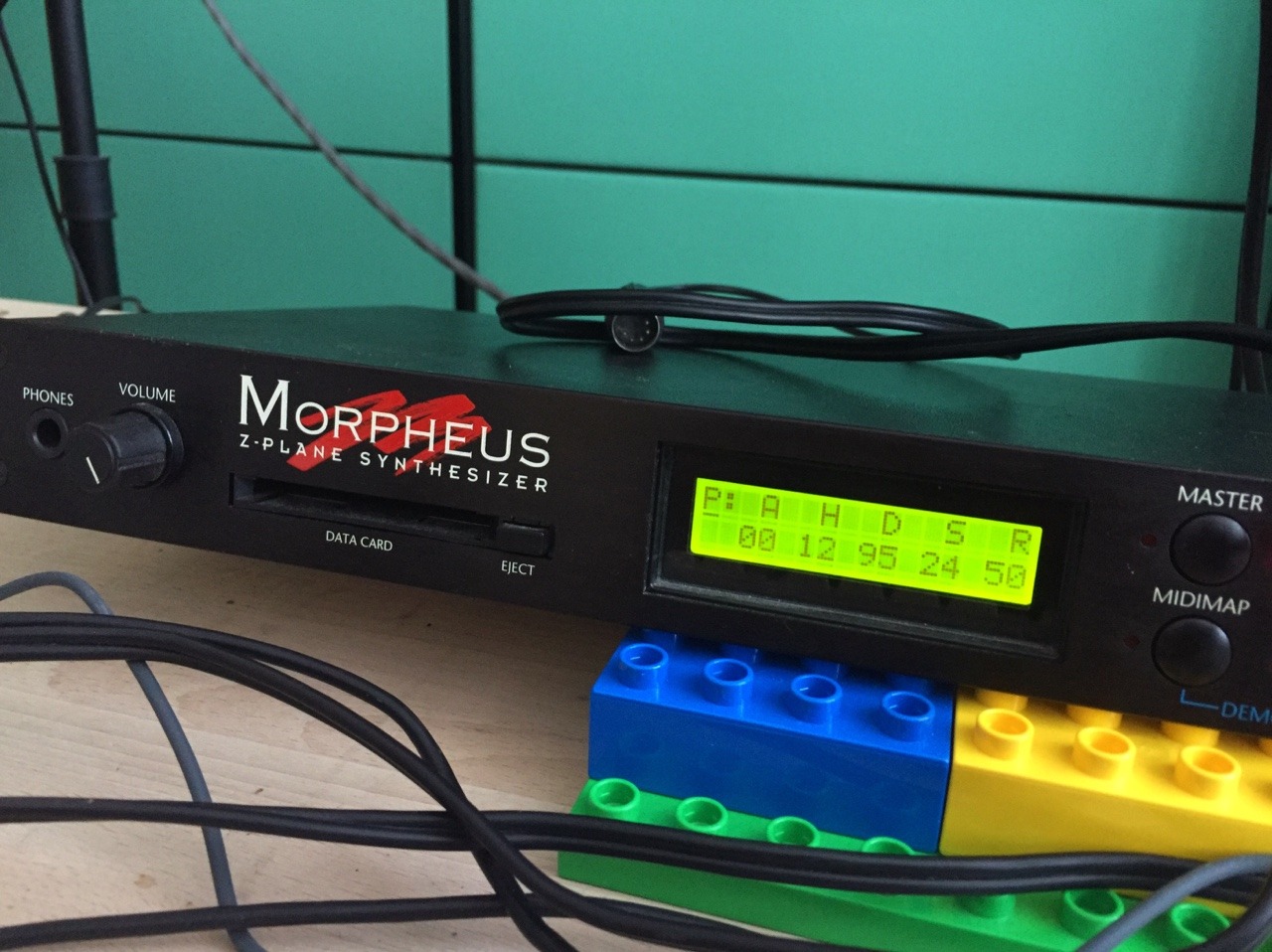 E-MU MORPHEUS
I got this interesting vintage digital synthesizer towards the end of the Cyberspace Database production process. I haven't found much time to delve deep into it's functionality, but from what I can tell so far, it is not as complicated to program as the small display suggests. Nontheless the patches have a ton of parameters and the Morpheus' sonic capabilities are quite expansive.

As I was already far into mastering the album, this synth hasn't got much action on Cyberspace Database. I've done some percussion elements on 'Corporate Intranet Menu Music' with it, as well as the re-recorded lead sound on 'Proterozoic Ocean'.

Can't wait to spend more time with this synth, to learn more about it's architecture.
▲